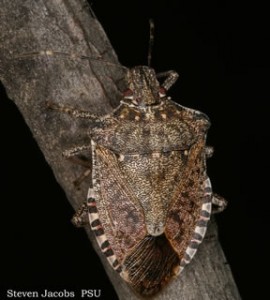 Organic stink bug remedy: a squirt gun filled with soapy water (I used dish liquid). While you're picking or weeding, squirt the bugs you see. It's far easier (and less smelly) than squishing them. The stuff works on Mexican bean beetles, Japanese beetles, and grasshoppers too. If you're not concerned about your karma, add some jalapeno squeezin's; makes 'em suffer as they die.